Brahmarshi Vishvamitra (Sanskrit: IAST: Viv-Mitra) is one of India’s most revered rishis or sages. He is also credited as the originator of most Mandala 3 of the Rigveda, including Gayatri Mantra, as a near-divine entity. According to the Puranas, only 24 rishis have learned the full meaning of the Gayatri Mantra and so wielded its full power from antiquity. The first is called Vishvamitra, while the last is meant to be Yajnavalkya. Brahmarishi Vishvamitra was a king before relinquishing his kingdom and royal dignity. Therefore he kept the title of Rajarshi, or “royal sage.”

Satyavati was married to an older man named Richika, who was the most powerful of the Bhrigu race. Ruchika sought a son with Brahmin traits. Therefore he presented Satyavati with a sacrifice gift (charu) that he had prepared to attain this goal. At Satyavati’s request, he also gave her mother another charu to make her conceive a boy with the Kshatriya character. On the other hand, Satyavati’s mother secretly requested that Satyavati exchange her charu with her. Satyavati’s mother gave birth to Vishvamitra, while Satyavati gave birth to Jamadagni, the father of Parashurama, a person with martial abilities.
Gayatri Mantra is supposed to have been discovered by Vishvamitra. It’s a Rigvedic verse from a sukta (Mandala 3.62.10). The Vedic meter in which the verse is written is known as Gyatr. The Gayatri mantra is extolled in various well-known Hindu texts, including Manusmriti (“There is nothing higher than the Savitri (Gayatri) Mantra.”, Manu II, 83), Harivamsa, and Bhagavad Gita. The mantra is a key aspect of Hinduism’s upanayana ceremony for young males, and dvija men have said it as part of their daily rituals for centuries. Modern Hindu reform movements have expanded the practice of reciting the mantra to include women and people of all castes, and it is now widely practiced.

Vishwamitra Maharshi embodies a plethora of divine attributes. Despite having the most Light from Mula Brahman’s core and having unrivaled abilities, he constantly works quietly in the background, never revealing much about himself. He invariably refers to God and His work when one attempts to converse with him to learn more about him. Different Masters and divine personas have to be contacted to grasp his nature’s various capacities and characteristics. Only a small portion of his wholeness is revealed in the following material. It’s nearly impossible to comprehend and explain this master’s actual essence and brilliance. Because of the brilliance in the quality of his work, Vasishta Maharshi, one of the Saptarishis, claims that all the Rishis refer to him as “perfection embodied.”

He completes all of his responsibilities fast but with a great deal of love. Vishwamitra Maharshi, according to Vasishtha Maharshi, is the only individual who possesses a unique set of 108 Chakras. The seven chakras in our system connect us to the seven planets of the material universe; similarly, the 108 Unmanifested Universes that emerged from Mula Brahman are connected to the unique chakras in his system. He also has 1008 various sorts of specific Kundalini energy, which he acquired when exploring Mula Brahaman’s next extension. The two characteristics above are unique to him; no one else on the planet possesses them. Each of his system’s hairs has the same Light-carrying capacity as Parabrahma! He has several specialized devices installed in his system to assist him in his task. He has 72,000 gadgets in each of his ears. Each of his feet is stuffed with tens of thousands of gadgets. In his toe lies a unique device is known as the ‘Mirror gadget.’ It enables him to take several forms at the same time. Vishwamitra Maharshi would be a 7200-foot-tall personality if he lived up to his full potential; however, he would never do so.

Vasistha Maharshi claims that he has numerous distinct characteristics that will be disclosed later. Vishwamitra Maharshi travels in a highly unique spaceship. Although it appears little from the outside, it is around 1,08,000 square feet in size. This spacecraft contains 1,008,000 layers of protection, and if any one of these layers were to be damaged, the spacecraft would be destroyed. Vishwamitra Maharshi just revealed to the Rishis that he possesses a vast galaxy. He refers to it as the Royal Field. More information will be released later. Lord Kalki claims to have witnessed Vishwamitra Maharshi emit 1008 different varieties of light simultaneously, something no one else can achieve. His brightness is so powerful that he must shelter himself with 1008 layers of Energies every time he visits Earth; otherwise, our planet will not be able to endure the impact of his vibrations.

As a former king who ruled over such a huge territory, Vishvamitra was noted for his regal and frequently condescending demeanor. He was naughty for his hot temper, and in his rage, he would curse people, depleting his yogic skills, which he had earned through much penance. People feared his wrath and hoped that the sensitive sage would not misinterpret their acts. Vishvamitra, on the other hand, had enormous compassion for all beings as a former monarch. Trishanku pitied him, so he willingly expended all of the Punya he had obtained from his tapas for him to ascend to the sky. He was famed for using the power of his tapas to help anyone in need after achieving the level of Brahma Rishi, regardless of the cost to himself. 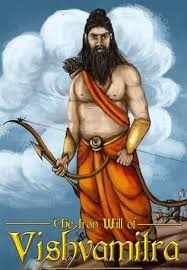 During one of his escapades, he and his troops rested in Rishi Vasistha’s ashram. His entire troop was well fed and cared for there. The monarch was perplexed about how such a small ashram could handle all of the logistics of feeding a full army. To the sage, he voiced his surprise. Vasistha responded by saying, “This feast, which you have shared with your relatives, was made possible by my calf Nandini (also known as Sabala), which was given to me by Indra. You should know that she is Indra’s cow Kamadhenu’s daughter. She ensures that I have all I require.”

When Kaushika heard this, he was struck with wonder. He began to believe that owning one cow would be quite valuable to him; after all, the sage did not have to feed and sustain a vast army daily. He declared his wish to receive Nandini from the guru. Vasistha was courteous but adamant in his denial. He would not be swayed by Kaushika’s offer of unlimited riches, for after all, who can put a price on a cow that can easily generate all the world’s riches? The king became quite enraged. He used harsh remarks to disparage the Brahmarishi and ordered his soldiers to take the cow and drive it back to his country. Nandini was Kamdhenu’s daughter, and as a result, she protested the soldiers vehemently. Vashishtha’s life was saved thanks to her abilities.

On the contrary, Vasistha uses his immense mystic and spiritual skills to destroy Kaushika’s entire army by simply breathing the Aum word. Vasistha also murders one hundred of Kaushika’s sons while restoring the beauty and life to his hermitage. Kaushika then performs a long Tapasya to please Shiva, who bestows the knowledge of heavenly weaponry upon him. He proudly returns to Vasistha’s ashram and destroys Vasistha and his hermitage with various lethal weapons. In the latter, he succeeds, but not in the former. Vasistha, angry, pulls out his brahmadanda, a wooden rod blessed with Brahma’s power. Kaushika’s most formidable weapons, including the brahmastra, are consumed by it. Vasistha then attempts to attack Kaushika, but the Devas calm him down. While Vasistha recovers his hermitage, Kaushika is humiliated.

After cursing Rambha, Kaushika travels to the Himalayas’ highest peak to execute an even more severe Tapasya lasting over a thousand years. He stops eating and holds his breath to a bare minimum. Indra puts him to the test once more when he appears a poor Brahmin pleading for food, just as Kaushika is about to break a long fast by eating some rice. Kaushika immediately hands over his food to Indra and returns to his meditation. Kaushika also masters his passions, refusing to be stirred by any of Indra’s trials and tribulations, seductive interferences. Kaushika’s yogic power is at its pinnacle at the end of a multi-thousand-year journey. At the head of the Devas commanded by Indra, Brahma names Kaushika a Brahma rishi and gives him the name Vishvamitra, or All-Friend, for his boundless compassion. Vasistha embraces him as well, putting an end to their feud.

Vishwamitra Maharshi gives us the following directions and messages:
1. Vishwamitra Maharshi advises us to work hard to reveal our hidden inner capabilities. He claims that the more facilities we have available, the easier it will be to get through the Pralaya Period. We should not be alarmed but rather be aware of light at all times and speak and listen to it. According to him, one can achieve higher spiritual levels by using this approach.
2. He wants us to acquire a sense of caring for one another. He claims that we shall be better prepared to live in the Satya Yuga by practicing this behavior. We should not be greedy or cruel to one another because it ultimately harms Mother Earth’s well-being. He claims he can no longer perceive Mother Earth’s suffering and urges us to feel her anguish and begin to relate to everyone in a spirit of oneness and togetherness.
3. Vishwamitra is the third person in the Vishwamitra family. Maharshi encourages us to be aware of our surroundings and not take anything for granted. He wants us to take the initiative and do tasks with the highest care and respect. We have no right to exploit God’s soil because we are on it. ‘Work is Worship,’ he says, summarising this instruction.
4. He claims that we should accept newer energies with love when they are released. Let us not be alarmed or agitated by the new situations that occur due to this energy. “Connect to Light, be brave, and confront the circumstance with a smile and ease.” Always keep your heart pure; this will help you strengthen your intuition and open up additional inner resources,” he says.
5. When dealing with persons who are not of our vibrations and frequencies, Vishwamitra Maharshi advises not to dismiss them. We should smile, be patient, connect with light, and begin passing it on to others. This will automatically halt the propagation of their unpleasant feelings, allowing us to continue communicating with them. He advises us to make the most of our Sadhana, Peace, Love, and Light. We should also avoid pointless debates, hatred, selfishness, and laziness. According to Vishwamitra Maharshi, we should love everyone, aid others, and be kind to everyone.

Maharishi Vishvamitra is one of India’s most revered rishis or sages. He has also written most of Rigveda’s Mandala 3, including the Gayatri Mantra. According to the Puranas, only 24 rishis comprehended the Gayatri Mantra’s full meaning and wielded its full power from antiquity. The first is called Vishvamitra, while the last is meant to be Yajnavalkya.

The grace of gurus like Vishwamitra Maharshi makes our trip to the Light age much easier. Much of his work, sacrifices, and sufferings in bringing humanity closer to a better existence have gone unnoticed. Nonetheless, the brief peek we get of his remarkable life and accomplishments should offer us faith that we are in good hands as we navigate through the challenging times on our planet. This master may provide us with a lot of spiritual guidance and inspiration. All that is expected of us is that we put what they teach into practice, as it is based on their vast wisdom and experience.
May his light shine brightly in us at all times.

5+ Signs the Universe Wants You to Be with Someone